An early student of Emma Scott Raff's, Margaret Eaton became an active benefactor of the school. In 1906, the Eaton family provided a building for the school, located on Bay Street in Toronto. 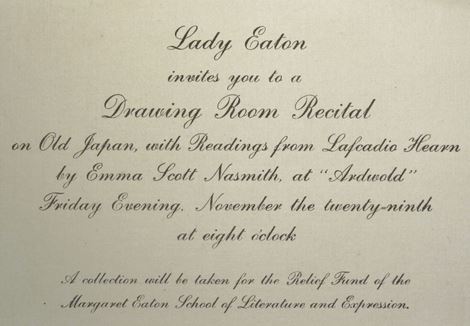 Shortly after Elizabeth Pitt graduated from The Margaret Eaton School in 1925, she began working as director of the Eaton Company's Shadow Lake Camp. She also worked several years directing Y.W.C.A. programs, and was a close friend of the great sculptor R. Tait Mackenzie. Elizabeth Pitt organized a school reunion in 1975, more than thirty years after the school closed.

Becoming the school's principal after Emma Scott Raff,
Mary Hamilton led the school as its educational focus became primarily physical education training. In 1925, Hamilton was also instrumental in establishing Camp Tanamakoon on White’s Lake in Algonquin Park, Ontario. She retired as the school's principal in 1934, but continued as director of the camp until 1953. Mary Hamilton and The Margaret Eaton School played a key role in the development of the Canadian Physical Education Association (CPEA) by hosting its founding meeting.

After studying elocution at The Margaret School School of Literature and Expression, Dora Mavor Moore went on to become the first Canadian to graduate from London's Royal Academy of Dramatic Art. She was active in Ontario's theatre world for most of her life by teaching drama classes and creating the Village Players – a group that performed Shakespeare in area schools. She also was influential in enlisting Tyrone Guthrie to become the founding director of the Stratford Festival.

After Mary Hamilton's retirement in 1934, Florence Somers (known to her students by the nickname "Fliss") became the principal of The Margaret Eaton School. She encouraged the school's amalgamation into University of Toronto, and she joined University of Toronto's faculty, working there until her retirement in 1949. She was the first female president of the Canadian Physical Education Association (CPEA). In 1930, she published a book entitled Principles of Women`s Athletics.